“The Declaration of World Human Studies” 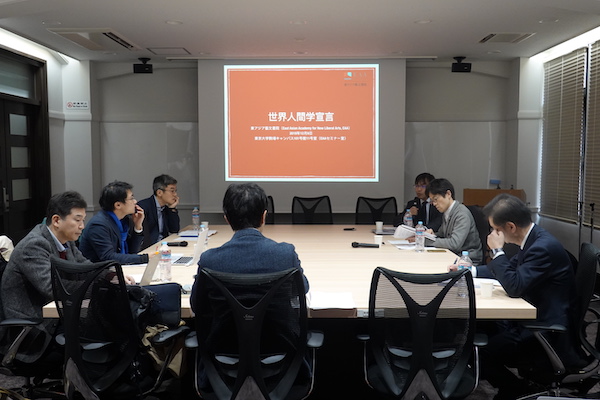 At the beginning of the conference, Prof. Nakajima pointed out that the twenty-first century is an era in which we need to revisit the notion of the “human being.” We can no longer maintain a human-centered humanism, because globalization has drastically changed both our way of being and the world that we inhabit. Nakajima suggested that we should create a new notion, such as “human co-becoming,” which would enable us to open a new dimension for academic movements.

The first speaker, Prof. Ishii proposed that we might look to Chinese Philosophy as we create “World Human Studies.” He argued for a deconstruction of the modern dichotomy of nature and artifice by referring to the discussion of Xunzi and Zhuangzi. On their account, nature is not spontaneous or self-evolving, but rather constructed by human activity — namely, it is artificial. In view of this, we can see that “bunri (文理) — pattern and principle in Puett’s term.” More specifically, bun (文) has been considered as the opposite of ya (野) — where “文” means civilization, while “野” means barbarism or primitivism. Though these two terms appear to be in opposition, they also can be interchanged with each other. Ishii refers to this overlapping and chaotic sphere in which “文” and “野” interchange as kōko (江湖). He emphasized that only this sphere of overlap can produce the possibilities for a revolution, namely overthrowing the existing order.

As the second speaker, Prof. Ōta discussed how the human being will be considered in the future from the perspective of the life sciences. He emphasized the importance of biological diversity, which human beings have destroyed. He also expressed concern about the possibility that artificial intelligence and information technologies can harm humanity through the progressive digitalization of everything, even life itself. For example, genome editing technology has already enabled human beings to create new life forms, as if we were gods. Ōta argued that we must pause, step back, and put efforts into imagining and building a new humanities. In addition, he also pointed out that the notion of “kōko(江湖)” can be compared with the physical concept of the “edge of chaos,” which generates a new order in the universe.

Prof. Tanabe Akio, the third speaker, proposed that we consider the possibility of “World Human Studies” under the concept of the Anthropocene. On his account, the values of the modern enlightenment and progressivism are losing their effectiveness in the epoch of the Anthropocene. Simultaneously, humans will need to revisit the bases of their lives and their relationships with others, including nature. Tanabe argues for a new possibility in the Anthropocene, because he believes humans can experience drastic changes influenced by others through the mediation of affect. In other words, human being can be transformed into “human co-becoming.” He proposes that “World Human Studies” should create a new discourse to connect “human co-becoming” and the world.

The fourth speaker was Takeda Masaaki. He reviewed the concept of “World Literature,” which has received considerable attention in recent years, especially in the study of English literature in the eighteenth century. Robinson Crusoe, which is often cited among the first modern novels, is a novel that expresses the values of empiricism and individualism. It might be argued that this novel was an origin of “national literature.” However, it also can be said that this novel might have failed to gain this assessment without the appearance of globalization. For Takeda, this duality is important when we rethink the concept of literature itself. Literature should not only be understood within the context of the nation. Rather, we should understand it within a universal context. To promote the movement of “world literature,” he suggested we should read materials using methods of “distant reading,” rather than intensive reading.

After Takeda’s presentation, Prof. Date Kiyonobu proposed that we consider “World Human Studies” from the perspective of French religious studies. According to Date, the study of the humanities in France has both adapted itself to Anglo-American globalization, and worked to oppose it. In particular, he focused on the theme of secularism [laïcité]. Laïcité is a policy of separating the secular from the religious, and to thereby ensure a “secular world,” but the emergence of new perspectives on humanity has urged us to reconsider this policy. Simultaneously, the necessity of a reconsideration of the modern concept of religion has been also discussed. Invoking Karatani Kōjin’s argument concerning “world religion,” Date argued that similar  problems have appeared in post-war Japan.

The last speaker, Prof. Baji Tomohito began his discussion by proposing the question of how we might re-narrate the history of European political thought. He pointed out that “the Declaration of World Human Studies” does not articulate an alternative idea in place of globalization. This implies that a new concept for the construction of a new world has not yet be invented. If we cannot create a new concept of the world, we will not construct the new forms of subjectivity which may counter the forces of globalization. To overcome this problem, he suggested that we revisit the idea of “identity,” for we can no longer maintain monolithic conceptions of identity. He argued that we should abandon the conventional views of identity and invent new forms which are open to plurality.

After the presentations, the participants engaged in a heated discussion. To wrap up, Prof. Nakajima raised one concept which had penetrated whole discussion of the day. That is “the personal”, which was differentiated from the modern concepts of the “private” or “public.” On Nakajima’s account, as we try to consider “the personal,” it is inevitable that we would reconcile “the private” and “the public,” because “the personal” is fundamentally related to these two spheres.

All the participants enjoyed a very productive discussion and the conference ended successfully. We greatly appreciate the active participation by all, and hope to continue the themes and arguments of this conference in future events. 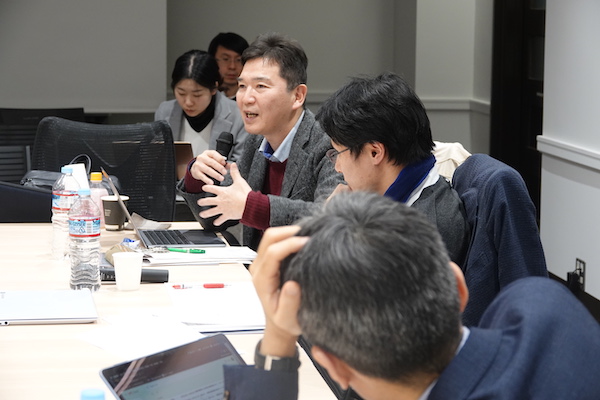