Report: International Conference “Reality and Fiction in Philosophy and Literature” 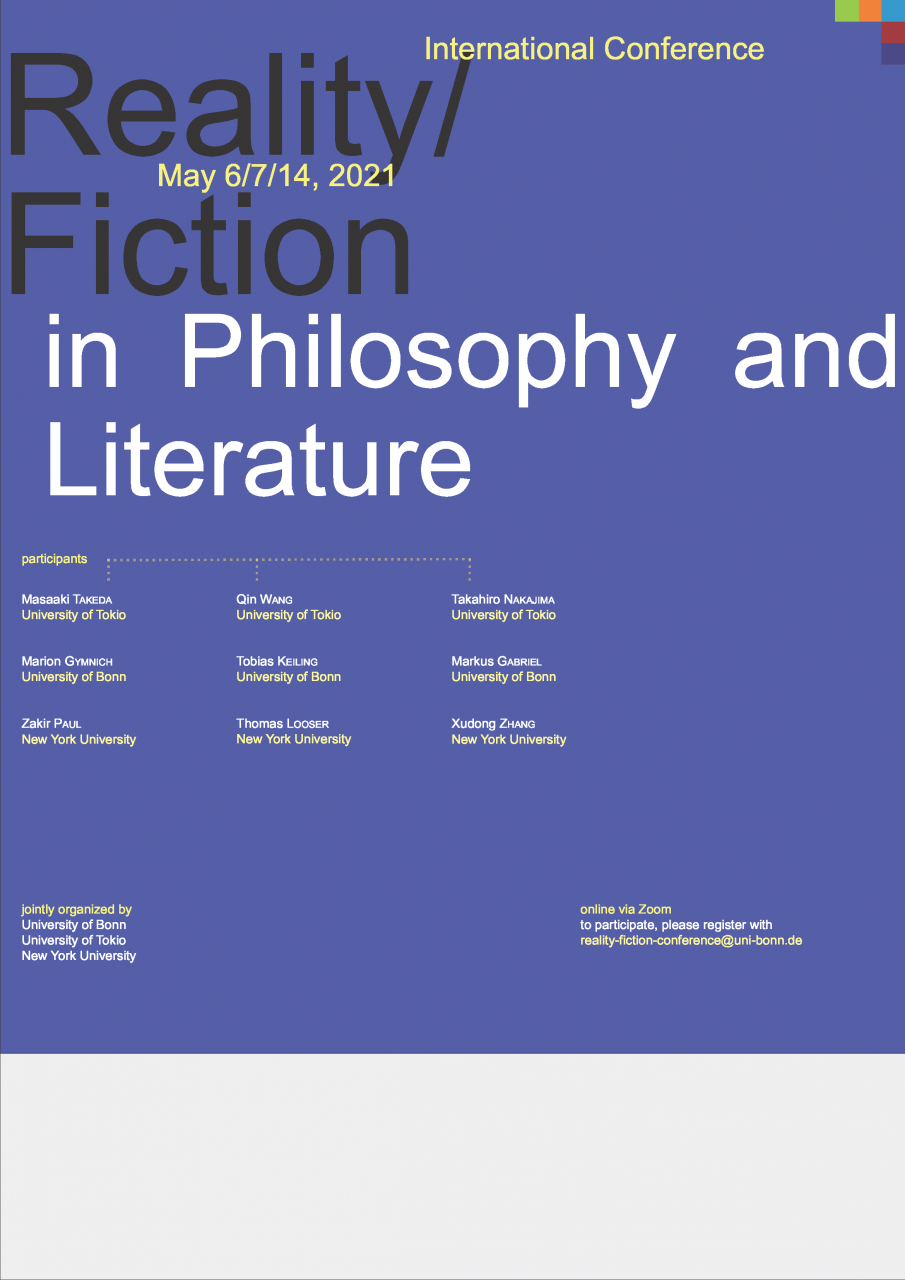 The first presenter, Professor Masaaki Takeda (UTokyo), in his talk “‘Such a Damn’d Clever Book’: Poetics of Suspended Animation in Sterne’s Tristram Shandy,” discussed the relationship between an author and her work in terms of fictionality. While in the eighteenth-century there are authors, like Daniel Defoe, who regarded their stories as an extension of their “real life,” other authors, like Henry Fielding, put their names on their works. Focusing on Laurence Sterne’s Tristram Shandy, Takeda analyzed the particular ways in which the proper name “Tristram” appears in the work. The author, Takeda argued, attempts to destabilize the reality through a doubly-fictionalized name, just as autobiography functions as “defacement” for Paul de Man in his interpretation of Wordsworth. Takeda then developed the dubious relationship between the half-word “Tristram Shandy” and the author, where “suspended animation” implicates an existence that is indeterminate. Sudden death and accidental injuries become the condition of a “kingdom of hearty laughing subjects,” as Sterne puts it. But this “kingdom,” Takeda warned, also indicates the political engagement with colonialism.

In her presentation on “Fragile Constructions of Reality in Kazuo Ishiguro’s Klara and the Sun (2021),” Professor Marion Gymnich (Univ. Bonn) first drew attention to Ishiguro’s genre hybridity, which complicates readers’ assumptions about reality within the fictional universe. Taking on the genres of dystopia and science fiction, Gymnich argued, Ishiguro’s latest novel explores changes in social classes and the maintenance of social inequality. Gymnich emphasized the partitioning of Klara’s perception into small segments, associating Ishiguro’s description to the problematic of android ethics. The image of the sun, Gymnich pointed out, introduces a new dimension of reality into the novel, for it may be regarded as reviving the stage of religion. At this point, Gymnich suggested, the conventions of different genres will put forward different questions to the work.

Professor Zakir Paul (NYU) presented on “Crises of Intelligence.” Zakir first gave an etymological explanation of the term “crisis,” which designates “change” in terms of value, society, class, etc. By revisiting the Deleuzean “society of control,” Zakir considered the way in which “intelligence” has been discussed in the present day as well as the history of discourses on “intelligence.” The first metamorphosis, Zakir argued while quoting from Malabou, is a genetic paradigm, while the second metamorphosis turns out to be epigenetic. The third metamorphosis has to do with the computer-brain and neuronal architecture. Zakir pointed out that the crisis of AI in the present day lies in turning AI into a paradigm, or what he terms “fake-AI,” for the surveillance and governance of the society.

The second day of the conference began with Qin Wang’s (UTokyo) presentation on “Dialectics of Writing and Memory: A Reading of Lu Xun’s ‘Preface’ to Outcry.” Through a rereading of Lu Xun’s preface to his first collection of stories, Wang argued that writing in Lu Xun is not so much a neutral means of transcription of what happened as it is a creative articulation of memory. The dialectical relation between writing and memory, Wang pointed out, thus enables Lu Xun to organize representations of his personal experience in the preface into a particular chain of signification leading toward Outcry, and the ongoing literary movement.

Professor Tobias Keiling (Univ. Bonn) gave a presentation entitled “Between Fact and Fiction: Hermeneutic Truth.” Keiling focused on Gadamer’s use of interjection, pointing out the aspects of the hermeneutic truth — namely, the “personal,” “contextual,” “dialogical,” and “modal.” Before coming to an agreement on facts, the interlocutors must presuppose some states of affairs that are but “possible” (or in the mode of “as if”). The truth of art, Keiling stressed, has a lot to do with the moment in the fourth modal from “possibility” to “reality.” “Fiction,” Keiling concluded, is indispensable to Gadamer’s understanding of the hermeneutic truth.

Professor Todd Foley’s (NYU) presentation, “Wang Anyi’s I Love Bill: Fiction and Reality of the Universal,” associated Wang Anyi’s novel with the historical context of China in the early 2000s. Foley discussed the complicated relationship between China and the West, represented by Bill and Ah San, arguing that the imaginary of global cosmopolitanism eventually stumbles on the nationalistic characteristics of China. Global capitalism is structured around global economic inequality and uneven development, a game in which China will never be recognized as a fair player, emphasized Foley. Following Scheleiermacher’s observation concerning the relationship between concept and national language, Foley argued that the world Wang Anyi depicts is always fragmented into incommensurable parts.

On the third day of the conference, Professor Takahiro Nakajima (UTokyo) first presented on “Figurative Reality: Compound of Reality and Fiction in Kūkai’s Shojijisogi [The Meaning of Sound, Letter, and Reality],” in which he introduced the thought of Kūkai, a foundational Japanese philosopher. On Nakajima’s reading of Kūkai, it is only when the sound and the letters of a language are revealed clearly through its teaching, that reality can become manifest. Comparing Kūkai’s “true name” with the “rectification” of names in Xunzi, Nakajima pointed out that Kūkai tackles the problem of language in a multi-linguistic space, where sound and letter always engage with the reality. Given the close relationship between sound, letter, and reality, Nakajima concluded that reality is not a fictional reality, but rather a figurative reality. Buddha is precisely this figurative reality itself.

Professor Markus Gabriel (Univ. Bonn) gave a presentation entitled “Real Fiction.” Gabriel started with a brief summary of his book on fiction, focusing on the proposition that “nonexistence may mean to exist elsewhere.” Gabriel then rephrased his theory of fields of sense and raised the problem of “nonsense.” In order to address this problem, Gabriel appealed to the interpretation of artworks. On his account, interpretation fills the gap in the score when we experience artworks, where the distinction between the object of the score (which has material reality) and the object imagined by the interpreter (which has psychological reality) produces a gap (which is the nonsense). This gap does not belong to either objecthood. Sense, concluded Gabriel, can only emerge from the space of nonsense.

Finally, Professor Xudong Zhang (NYU), in his presentation “Politics of Time in Lu Xun and Yu Hua,” discussed the intensely and entirely political signification of the concept of time in the two writers. In Lu Xun, Zhang argued, a politics of time is embodied in a biological determinism and the essayistic mode of writing, while in Yu Hua it is a stoic philosophy of survival as allegorical and affective narrative, which ushers in a tragic counter-movement against the earthly pursuit of happiness. Zhang further analyzed the three-fold model of time in Lu Xun vis-à-vis the linear-cyclical duality as well as the duality of chronological vs. cosmological time in Yu Hua.

The three-day conference ended with concluding remarks by Professor Nakajima, drawing upon the image of Walter Benjamin’s notion of a “constellation” as a way of situating the presentations.

Reported by Qin Wang (Graduate School of Arts and Sciences)