The first lecture for the EAA Global Lecture Series co-organised by EAA and GGG (Go Global Gateway at UTokyo) was held on 12 August on Zoom. This new lecture series invites guest speakers from across the world and disciplines to talk about research questions that they have now. It aims to provide opportunities for students at the University of Tokyo and Peking University to meet researchers who work internationally, and also to get to know various perspectives arising from the researchers’ rich cultural, linguistic, and academic experience. As the first guest lecturer, EAA invited Dr. Martin Orwin (Associate Professor at the University of Naples “L’Orientale”) to talk about his approaches in researching Somali poetry. Somali poetry is not well-known in Japan, but how should one read and understand literature from such an unfamiliar culture?

How Somali conceptualises “literature” and “poetry”

Orwin began by stressing that the ways in which “literature” is conceptualised differ depending on cultures, and demonstrated this point by explaining how the Somali people perceive and categorise their literature. The general term for “literature” in Somali, suugaan, is in fact best known for designating pasture that grows out from the ground when it rains. Rain can be very scarce in the region where Somali is spoken (so “water” is a constant image in its poetry), the environment of which the term reflects. In other words, “literature” in Somali would mean language that is rich as the pasture. It includes various genres of literature including poetry, tales, stories, riddles, and songs—in short, anything crafted in an artistic manner. This different conceptualisation of the term also applies to the case of “poetry”, and this relates to one of the inquiries he is currently exploring—the question of how the Somali perceive and conceptualise their poetry. There are four types in Somali poetry: gabay, maanso, hees, and tix. Amongst them, he pays particular attention to the following two forms for his research: hees (folkloric, mostly anonymous, tend to be recited one after another, and its words could be changed) and maanso (more serious poems and its words cannot be changed; the poet is known).

Literature to be heard, not to read

Somali poetry has been, and still is, predominantly oral literature. Even the written poetry, Orwin says, is essentially there to be listened to. Experiencing poetry would mean for them, is not to read in books/ magazines. If one were to read them, the purpose for doing so is to recite them. Due to being “heard poetry” (if I borrow his term), various audio medias—cassettes back in the 1970s and 80s, and online video sharing medias such as YouTube nowadays—have played a vital role in disseminating Somali poetry in contemporary times.

This characteristic of Somali poetry as “heard poetry,” combined with his academic background as a linguist and his appreciation of music, comes together in his approach in researching Somali poetry. In introducing some Somali work-songs, Orwin demonstrated the way he examines how language, sound patterns, and music fit together. He used graphs of sound patterns to analyse the way people sing and visually showed how that relates to the pitch in the language. Such sound patterns in Somali poetry are also inseparable in the contemporary context. One of the examples he shared was a short video clip produced by the UNICEF: a music video of a song in which the lyrics explain how one could protect oneself from the coronavirus (Axmed Budul, dhannto about Coronavirus). The lyrics includes a strong alliteration of the “fa” sound (of “fayruus”, i.e. “virus” in Somali)—and its repetition makes the song memorable. When they try to deliver a message that they really want people to hear, he explained, the Somali often put the message in a song. 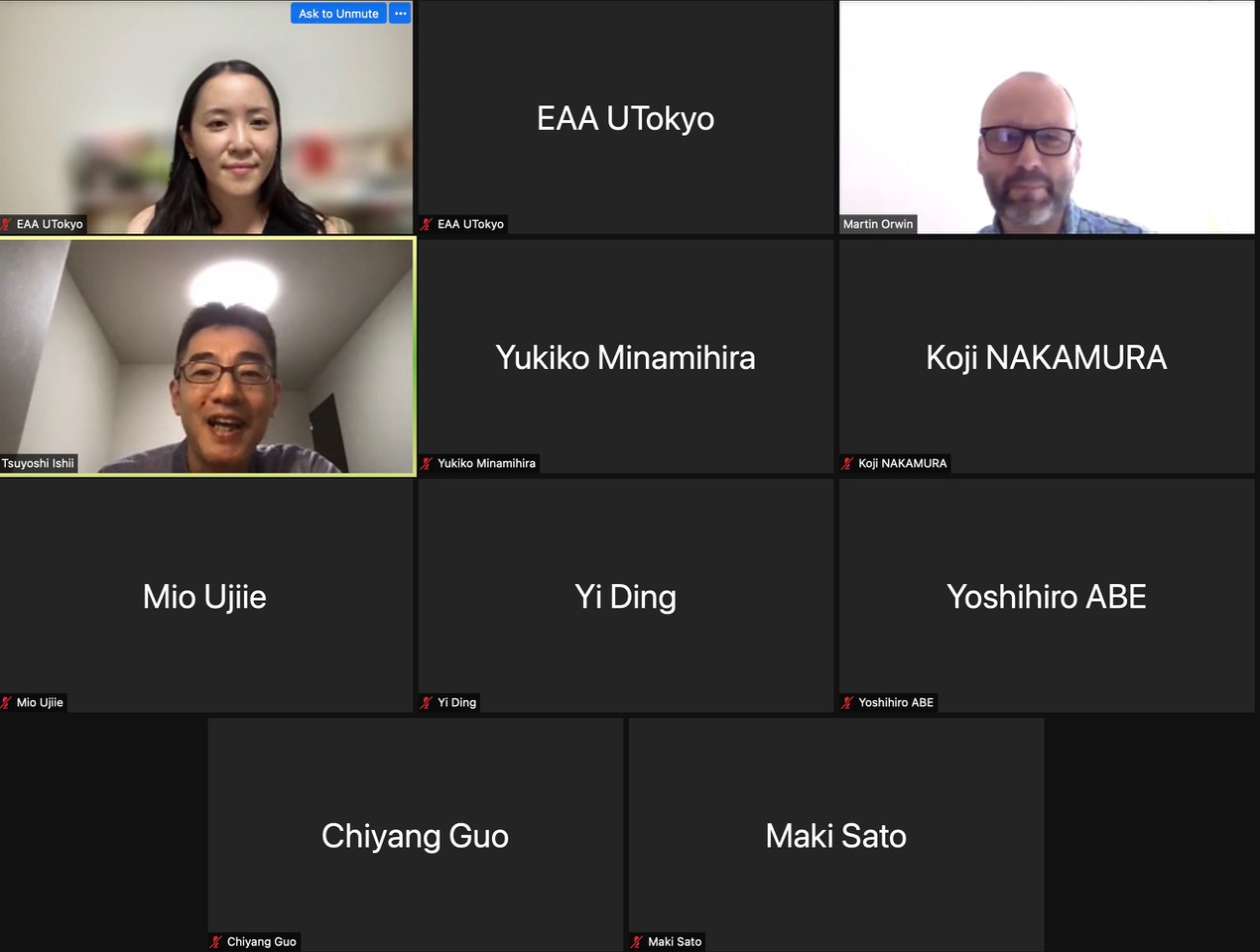 Towards the end of the session, he took the audience through one of the gabay poems he translated, Saxansaxo (‘Rain’s Breeze’ by Xasan Xaaji Cabdullaahi ‘Xasan Ganey’). One of the aspects of Somali poetry that he has been trying to understand is the meaning of metaphors in the poems. To decipher the meanings when he translates these poems, he often relies on Somali speakers, and he told how the act of translation itself could involve research and ways in which it had informed his research. As he commented on the poem he translated, beautiful poetic landscapes unfolded, and the richness of the language was revealed. Though it is impossible to transmit all of these aspects of the poems through translation, this richness seems to have served as his strong motivation for exploring the research questions he has now.

Orwin’s lecture suggests what reading literature crafted in a remote culture (and of a less translated language) might bring us. His talk made me revisit how “literature” and “poetry” are conceptualised and categorised in the case of Japanese literature. Listening to the Somali poetry along with its music aroused my curiosity not only for differences but also for its similarities, and made me wondered why it sounded so familiar in many places despite the cultural divide, a point which was also discussed during the Q&A. In the conversation with Eckermann in 1827, Goethe once emphasised how reading literature from other nations could liberate people from parochialism that they often get into, and called for the age of world literature (Johann P. Eckermann, Gespräche mit Goethe in den letzten Jahren seines Lebens, Brockhaus: Leipzig, 1836 & Heinrichshofen: Magdeburg, 1848). Orwin’s lecture on Somali poetry allowed me to experience the dynamics at work in such encounters, and to find a way in which it could work as a stimulus for broadening my perspective.

If you would like to read more about the Somali poetry, please refer to the following article:

The second EAA Global Lecture will be on 5 October 2021. For further information, please visit its event information page.