Report: The 30th Meeting of the Michiko Ishimure Reading Group 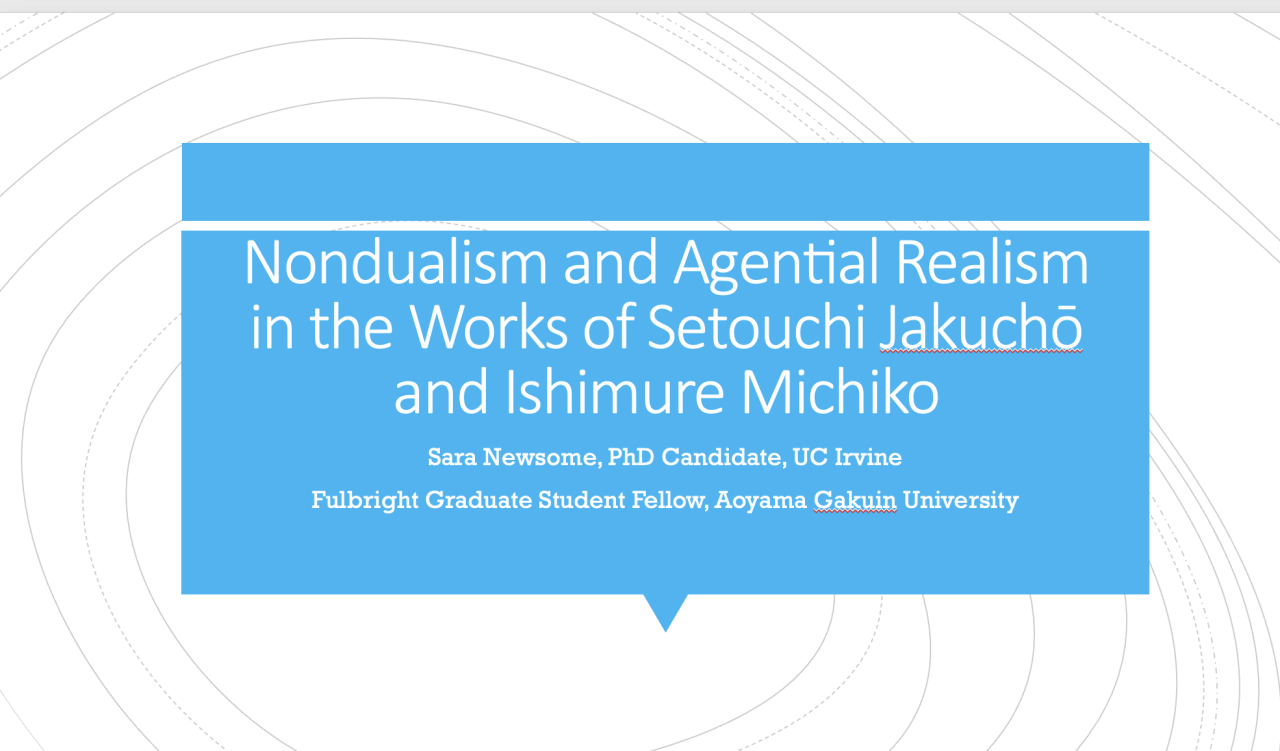 The monk Ippen Shōnin is the founder of the Ji-shū school of Buddhism. His form of nondualism, in which all matter and phenomena is only the nenbutsu, is radical in its inclusion of nonmaterial concepts such as time. This larger form of interconnectivity across spacetime is similar to the philosophy proposed by quantum physicist Karen Barad, termed agential realism. Phenomena can only be separated through agential cuts, which are just temporary enactments of separation.

Ishimure Michiko’s Tenko uses this radical nonduality to encourage a respect for all things, be they human, animal, plant or mineral. This is similar to Setouchi Jakuchō’s Hana ni toe, as they both seem to take a cue from Ippen’s understanding of radical nonduality to include time and an ability to travel from the current reality to a dream world. Both also tie this compression of time to specific places, such as Hana ni toe’s Ryōsuke’s connection to Ippen’s past when he visits the Kumano Shrine during a pilgrimage and, in Tenko, Masahiko’s sudden connection to the land that occurs when he first visits the lake. Further, the ability of the Tenko character Kappei to enter into various villager’s dreams is not dissimilar to Hana ni toe’s Ryōsuke and Mio’s dream conversations with Ippen and Chōichi. Dreams as a state exist outside of time, a physical world where Kappei and others can travel to the old village of Amazoko or to Oki no miya, while Ryōsuke can converse with long-dead monks and nuns in his dreams, suggesting a shared essence between the reality of the present and the land of dreams outside of linear time. This radical nonduality is used in both cases to argue for respect, of the land and of religion, as well as, in Hana ni toe’s case, women who have been forgotten by history. The point is not that the essence of every being and concept is completely the same; each person is an individual, and Ishimure takes particular care to name the breeds of animals and types of plants in order to avoid lumping all grasses or birds in together, out of respect for the individuality. This is why Ippen, in the famous saying that leads to the title of the novel Hana ni toe (“Ask the Flowers,”)  said to ask flowers about their business, and purple clouds about theirs. However, the shared essence that Ishimure and Setouchi demonstrate in their novels is in order to remind readers of our deep and interconnected history and shared essence with all things in order to suggest a level of respect not possible in the modern divide of man and nature.
In the ensuing discussion, other aspects of Buddhism were brought up, such as the concept of emptiness and how it might be applied to these works. Further discussion on the similarities and differences between the works and philosophies of Setouchi Jakuchō and Ishimure Michiko also ensued, with an emphasis on Ishimure’s collectivist leanings compared to the individualism that appears in Setouchi Jakuchō’s works.