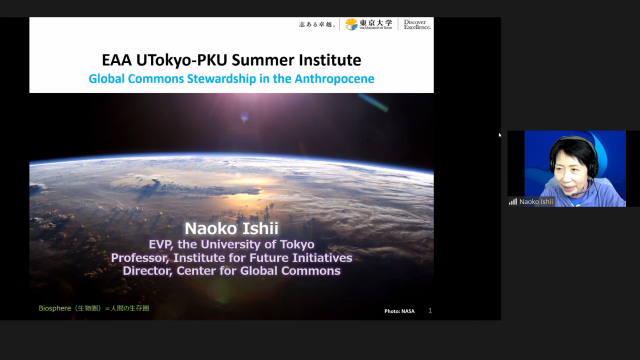 On September 6, 2021, Professor Naoko Ishii (Executive Vice President, Director of Institute for Future Initiatives, University of Tokyo), delivered the second lecture at the EAA UTokyo-PKU Summer Institute 2021, “Value and Value-ing: Visiblizing (the) Invisible,” exploring the theme of global commons stewardship in the Anthropocene. The reading material for the lecture was Governing the Commons (Cambridge University Press, 1990) by Elinor Ostrom.

With the aim of giving a broad overview of the global commons and the issues thereof, and providing her own thinking on them, Ishii divided her lecture into three sections. In the first, “Global Environmental Crisis,” she clarified that we are approaching the tipping point where the stability and resilience of the Earth’s systems are collapsing irreversibly. In this respect, two facts were emphasized: the transition from the Holocene to Anthropocene eras; and how, due to decisive humanity activities, we are exceeding the capacity of our planet.

In response to the above-mentioned tipping point, the second section, “Socioeconomic System Change,” examined the measures the world at large is taking. Here, the year 2050 is crucial, indicating the time limit by when we are able to set the Earth’s systems back on track, according to the Paris Agreement. Concretely speaking, it is important to consider the seventeen Sustainable Development Goals as a whole, instead of discretely. Additionally, a model of system change has already formed that covers the fields of both natural and social science. Ishii also shared a number of previous examples of interdisciplinary research in this regard.

In the third section, “Global Commons Stewardship,” Ishii also introduced her work at the University of Tokyo as a leading researcher in the field. In order to ponder the governing mechanism for the global commons, Ishii referred to Elinor Ostrom’s Governing the Commons, in which several principles are identified in terms of the management of common-pool resources at the local level. However, how should we apply those principles to the global commons? To answer it, Ishii highlighted several points: first and foremost, the scientific understanding of the fact that the stability and resilience of the Earth’s systems are the foundation of all human activities, which we are in danger of losing. Moreover, we are the ones who need to change—not the Earth’s systems. More specifically, it is our choice whether we chase short-term interests under the current socioeconomic system or rather safeguard our humanity collectively, which will ultimately transform our shared future as a species. 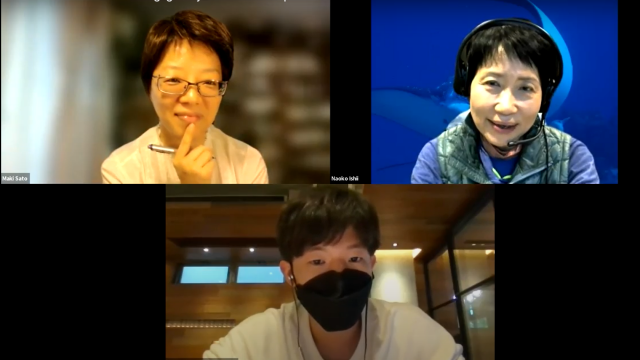 Following the lecture, the Q&A session was flooded with questions from the moderator, Professor Maki Sato, and students, touching upon various topics, such as the sociocultural issues to be tackled in global commons stewardship, the feasibility of (re-)aligning ourselves from the local level to the global level, and nuclear power. 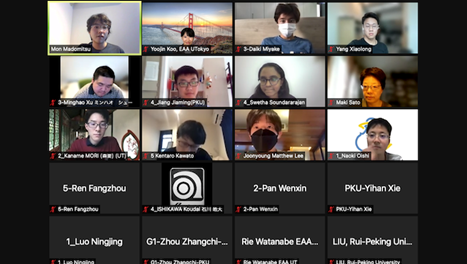 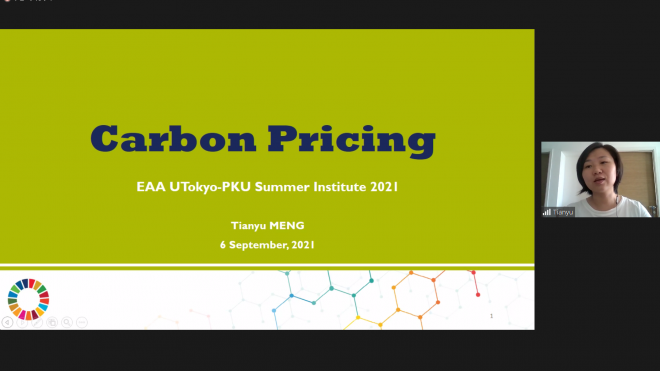