On November 24, 2020 from 5 p.m. in Room 11 of the Building 101 at Komaba Campus, the first workshop for the Building 101 film production project was held. This building was originally built to house the classrooms of the Special High School Course (特設高等科), a preliminary degree for Chinese students, in the 1930s, when the university was known as Tokyo Imperial University. EAA aims to create a new kind of liberal arts from and about East Asia, and is developing as a joint research-education program with Peking University as its main partner. Our Komaba office happens to be situated in this building, which was designed by Yoshikazu Uchida and was a bellwether of how the Komaba Campus rose up after the Great Kanto Earthquake in 1923. That is why EAA got interested in the history of this building and especially in the admission of Chinese students from the end of the nineteenth century. An archive project is currently underway regarding this. Thanks to the help of Takashi Tamura (The University of Tokyo) and Katsuya Orimo (The University of Tokyo), who are accumulating archival materials at the Komaba library and museum, EAA held a small exhibition, “Chinese Students in the First High School Days and the History of Building 101,” in the entrance of Building 101 from February 7, 2020. However, due to the coronavirus pandemic, entry to the campus became limited, and another part of the exhibition and a related symposium were both postponed. As such, the exhibition ultimately attracted few visitors.

While planning a short video documentation of the exhibition, we came up with another idea of making a film or films about Building 101 itself in order to pass on its history and make this available for other academic fields in the future to address critically. As a result, three research assistants were selected as workshop participants. The first is Satoshi Takahara (The University of Tokyo), who is trying to clarify the intellectual history of young men in the modern era mainly by analyzing student magazines from that period. He has been working for EAA since this April and already contributed much to the archival research project. The second is Shuichiro Higuma (The University of Tokyo), who is majoring in education with a focus on modern Japanese pedagogy, particularly that of Heiji Oikawa. The third is Sho Kotegawa (The University of Tokyo), who is conducting a study of Andrei Tarkovsky in the broader context of Russian culture. All three are doctoral students at the University of Tokyo, and Higuma and Kotegawa also have experience of making films.

For this first occasion, after an opening explanation from Takahara, we watched black and white documentary footage about the relocation of the First High School (旧制第一高等学校) from Hongo to Komaba. The Komaba Campus originally housed the Department of Agriculture. In the film, we could confirm a little about the process by which Building 101 was constructed in September 1935. Then we watched extracts from an early Yasujirō Ozu work, Tokyo Chorus (東京の合唱) (1931), a black and white silent film about a Japanese businessman. The main character, Okajima, graduated from the First High School. In the last scene, the characters sing a dormitory song. 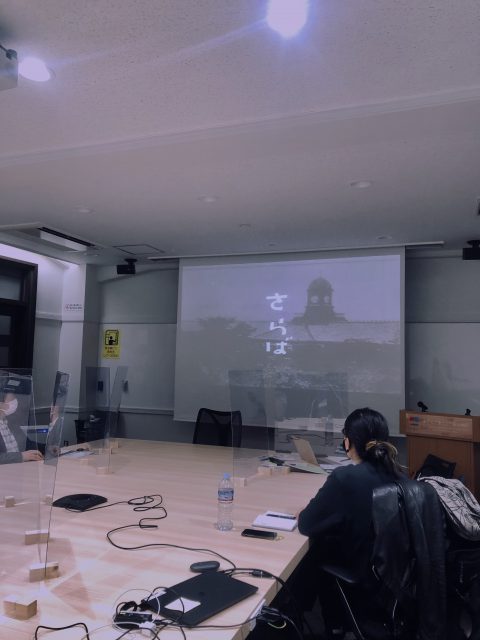 The research assistants shared their opinions about these two films, and also discussed how the project should strike a balance between creating a valuable film and carefully researching the history while also keeping in mind the very tense Sino-Japanese relations that existed at that time.