Following up on the EAA online workshop and discussion “Identity, History, and Legal Mobilization: Focusing on Japanese War Orphans from China”, which took place in November 2020, we held the EAA online workshop “Identity and Movements” on March 22, 2021. Our November workshop raised many questions: it revealed its present significance through a thought-provoking and wide ranging discussion that addressed issues such as identity (who are considered true Japanese), war responsibility and similar cases such as the comfort women issue, Okinawans and Ainu as Japanese, social movements, and post-activism, to list a few. These topics have motivated us to revisit the issues of identity and movements from various perspectives. 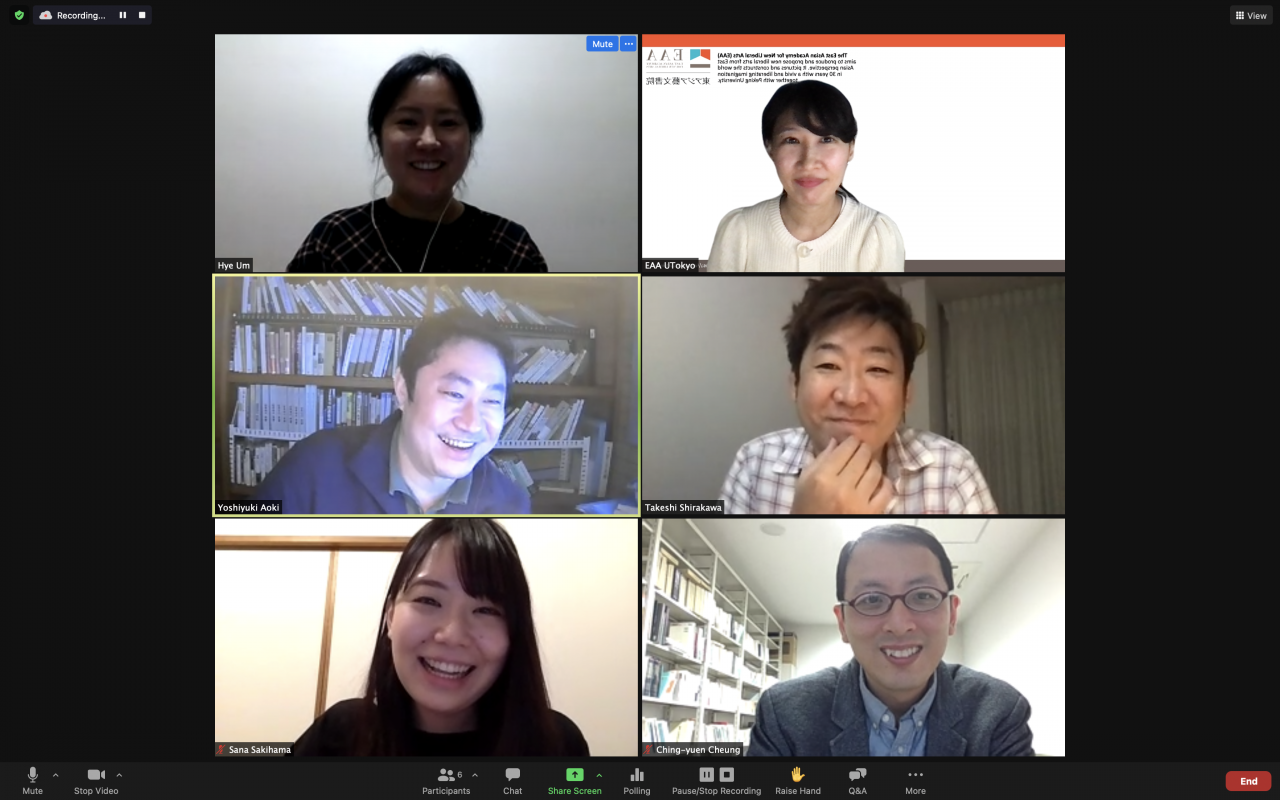 In our workshop the first two presentations tackled identity more directly, and the latter two concentrated on movements that have roots in issues related to identity. Takeshi Shirakawa (PhD Student, University of Hawaii), our first presenter, ushered in the issue of identity in the context of the nation-state under the title “Disturbance or Exception? the negotiation of identity for Japanese returnees.” Based on a perspective of Japan as a “striated space” as defined by Deleuze and Guattari, he analyzed the role of Japanese identity in the process of the repatriation of individuals who were left behind in China following the Second World War and highlighted the inherent tension in an identity as Japanese, which acts to provoke questions regarding the nature of “Japanese-ness.” Sana Sakihama (EAA Project Research Fellow) expanded on these ideas with her presentation entitled “The political philosophy of Ifa Fuyu: the limits of identity politics”, which examined Ifa Fuyu’s thinking in regard to the Okinawa issue and Okinawan people in modern Japan. She elucidated the limitations of “politics” as outlined by Jaqcues Rancière and the possibility of Ifa’s views as being “political philosophy”, thus building a framework that allows us to subtly scrutinize the Okinawan issue.

After the break, Yoshiyuki Aoki (Visiting Lecturer, Dokkyo University) addressed how identity correlates with movements and affects movement tactics – violence in particular – by looking into Korean student movements following the democratization of South Korea. His presentation, “Identity, violence, and student movements: a case study of Korean student movements in democratized Korea”, particularly emphasized the ways in which the identity of student movements in South Korea evolved and incorporated anti-Americanism, the militant legacy of the Japanese colonial period, the issue of North Korea, and the discourse surrounding reunification of the Korean peninsula. Here, he outlined an evolutionary process that in turn resulted in pronounced violent tactics. Lastly, Hye-Won Um (PhD, University of Hawaii) and Yoojin Koo (EAA Project Assistant Professor) raised the issue of identity in an effort to understand its possible in role in viewing legal activism related to Japanese war responsibility as social movements rather than as legal cases. Their approach used the framework of legal mobilization, which has gained more attention in recent years. As a preliminary study, they suggested the legal mobilization framework can provide new insight on and motivation to sustain war responsibility related litigation, as these cases have almost always ended in defeat for those who have brought them.

During this time, we were privileged to have Professor Ching-Yuen Cheung as a commentator. Professor CY specializes in Japanese and East Asian philosophy and has important insight into the issues facing Hong Kong. In the course of our workshop Professor CY pointed out matters such as the importance of “social death” of Japanese returnees; the pre-conditions that affected Ifa’s thought; the similarities and differences of student movements between democratized and democracy-consolidated periods in South Korea; and the expansion of legal cases as related to legal mobilization (such as cases related to war dead enshrined in Yasukuni Shrine, a practice which subsumes the ethnicity of non-Japanese war dead into the Imperial Japanese nation). These topics Professor CY raised are very critical in accounting for identity and movements, and together with questions from participants and the audience we were able to think of further issues, such as the way nationalism has been appropriated by parties from the left and right in both modern and contemporary Japan — something that has also occurred in nations worldwide — and the ways in which nationalism relates to identity and movements. The three-hours of our workshop literally flew by, reflecting our deep involvement in the discussion. We plan to collect these manuscripts in the EAA Booklet and to have further lively discussions in the future.