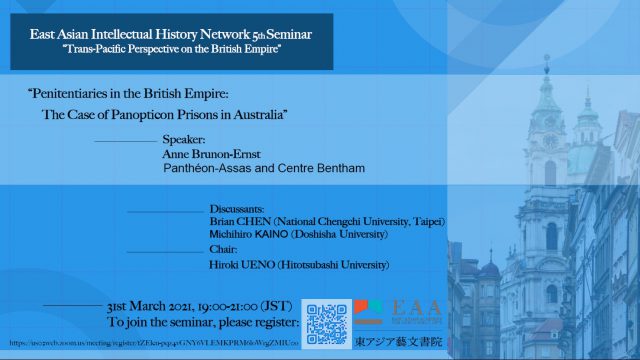 On 31st March2021, the East Asian Intellectual History Network (EAIHN), through the auspices of the EAA (East Asian Academy) at the University of Tokyo, hosted a talk by Anne Brunon-Ernst (Panthéon-Assas, Paris) entitled “Penitentiaries in the British Empire: The Case of Panopticon Prisons in Australia.” After opening remarks by the chair, Hiroki Ueno (EAIHN), Professor Brunon-Ernst briefly introduced the latest special issue in “La Revue d’études benthamiennes” edited by herself and her own article included in the volume, and situated these studies in the larger project on “Bentham and Australia” (which is, again, part of her long-term research programme of “Bentham and Empire”), sharing the informative Powerpoint slides. As is mentioned at the beginning of Anne’s paper, recent scholarship in modern intellectual history has paid so much attention to the so-called imperial dimension of Enlightenment thought and practice, in relation to imperial or global history. As the paper mentions, recent literature includes: Jennifer Pitts’ “A Turn to Empire”, Sankar Muthu’s edited volume, “Empire and Modern Political Thought”, and David Armitage’s “The Ideological Origins of the British Empire”. This kind of global and imperial context is something which we could not avoid when studying Enlightenment Europe in Asia. Of particular interest is the colonies as a kind of “laboratory in which Enlightenment utopias were experimented with” by the British and other European Empires. They can even be considered as radical and utopian experiments that could not be put to trial in the Old World, where customs and tradition were still alive and amalgamated with modernity considerably.

We plan to edit a journal special issue that will deal with the international and imperial dimension of the British Enlightenment including Radicalism. This seminar was also a good starting point for the EAIHN to organise the research collaboration dedicated to this plan. Everyone who is interested in the British Empire and its Enlightenment thought would be more than welcome to contribute to this planned special issue. Its detail is to be announced before too long. [Hiroki UENO]

The following is the abstract of the paper presented by Brunon-Ernst:

“Penitentiaries in the British Empire: The Case of Panopticon Prisons in Australia”

The settlement of a penal colony in Australia in 1788 was part of a wider Imperial plan to cast away unwanted members of the British community and to colonize unhospitable far-away lands. From the onset, the Australian project was fraught with contradictions, that were pointed out all through the 19th century by Jeremy Bentham and other penal reformers. To avoid setting up and maintaining an expensive system of incarceration at home, convicts were sent at great financial and human costs to the other end of the world. Faced with rebellious native inhabitants and re-offending European convicts, authorities in the colonies were however forced to set up a prison system to deal with them.

Influenced by modern penal theories in Europe and in the United-States, prison management authorities built prisons in Australia that shared elements of Bentham’s panopticon scheme. The irony will not be lost on Bentham scholars. Indeed, Bentham advocated early on the building of Panopticons in Britain to avoid transportation of convicts. Ultimately, Panopticons had to be built in the penal colony to compensate the shortcomings of a convict system unable to police crime.

The aim of the seminar is to investigate the panoptic features of some of the iconic prisons built in 19th c. Australia and identify the specificities of its penal system.