On 2 August Monday, from 19:30 to 21:00 (Tokyo time), Dr. Hiroki Ueno gave a talk on the topic of “The Enlightened Scots as Citizens of Europe”. The presentation was based on Dr. Ueno’s paper entitled “The French and English Models of Sociability in the Scottish Enlightenment: The Politics of Refined Culture in David Hume”, which is published in Annick Cossic & Emrys Jones (dir) La Représentation et la réinvention des espaces de sociabilité au cours du long XVIIIe siècle (Le Manuscrit, 2021). Professor Paul Tonks at Yonsei who is currently visiting Oxford as a fellow in residence and Professor Iago Ramos at Salamanca were the discussants. 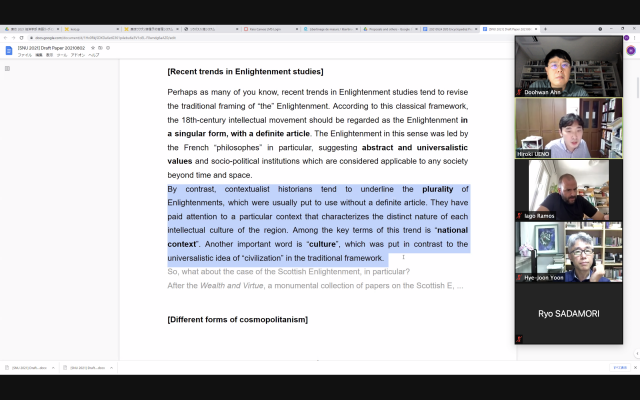 Dr. Ueno´s work is a bridge in the literature which sees the 18th century Scottish cosmopolitanism linked either with France or with England. He highlighted, instead, that the links are with both, rather than just with one or the other. From the comments, during the discussion, a suggestion was to look at the influence also of Holland and other European countries in Scotland.

Dr. Ueno also highlighted that the Scottishness of the 18th century cosmopolitanism is characterized by its focus on sociability. From the discussion after the presentation, a lively debate emerged about the difference between this Scottish understanding of cosmopolitanism and the Rousseaunian one which focused more on homogenization.

The presentation was extremely well prepared and the discussion energetic.