Park’s presentation was entitled “Emotional Reasoning: The Dynamic Characteristics of ‘Jeong 情’ in Traditional and Contemporary Korean Culture.” She raised the issue of how “J was/is . It is interesting to note that she pointed out the importance of the scholar Seongho Yi Ik (星湖李翼, 1681-1763) when considering “Jeong” in the traditional sense.

The second speaker, Ha Na, is a student of Professor Park. Her presentation was entitled “The Philosophical Discourse on ‘Public [– Focusing on Seongho Yi Ik (星湖 李瀷)’s Theory of the Public Seven Emotions [公七情].” As we can see from the title, she also mentioned Seongho Yi Ik, emphasizing the discussion on the nature of “Jeong” in the realm of “publicSince the discussion of “Jeong” was also prominent in 17th– and 18th-century China and Japan, the two speakers’ presentations are important in considering the contemporaneous trends of Confucianism in Korea, China, and Japan.

The third speaker was Tatebe Ryohei, who gave a presentation entitled “Characters (as Mediators of Ancient Ritual, Thought, and Emotion: Duan Yucai’s (Philosophy of Language.” He presented a discussion on the study of characters (文字) developed by a Qing dynasty Confucian scholar named Duan Yucai, especially on his work Shuowen Jiezi Zhu (説文解字注). Duan had developed many discussions by thinking about the meaning or nature of each character. According to Tatebe, knowing how Duan developed his imagination from each character or how he engaged with characters is a good approach for us to think about Chinese characters, which, after all, have greatly influenced Asian culture.

The first speaker was Winnie Sung. Her presentation was entitled “‘Wu惡’ in the Mencius,” analyzing the word “Wu 悪” of “羞惡之心” in Mencius. Along with “惻隱之心,” “辭讓之心,” and “是非之心,” “羞惡之心” is a famous moralistic heart emphasized by the Confucian scholar. According to her, in existing English-language scholarship, there is a tendency not to focus on “羞惡.” The reason she focuses on that issue is to think why there is the word “Wu,” which means disgust, in such a moral term.

The second speaker was Chen Huiya, who gave a presentation entitled “A Philosophical Reflection on the Healing of Shamanism in Taiwan.” It is a discussion of shamanism from a clinical psychology perspective. When a clinical psychologist confronts various patients, giving treatment based on a scientific perspective or telling them some scientific knowledge is not always good for patients to change their reality. In this sense, she pointed out the possibility of shamanism in practical treatment.

The afternoon session began with Professor Ellie Hua Wang (王華) from National Chengchi University. Her keynote speech was titled “The Nature of Ethical Knowledge in the Xunzi.” Professor Wang focused on the concept of reasoning in the text of Xunzi 荀子 and investigated the nature of knowing. Her main view was that Xunzi developed a type of constitutive reasoning which is different from the one of Aristotle. For Xunzi, Dao道 is not Heaven’s Way but the Former King’s先王 Way. And the categories are instituted to the purpose, not a definite mapping of sets. Human beings make not by reasoning but by daily .

Next, the PhD student from the Chinese University Hong Kong presented his reinterpretation of Mencius’ famous doctrine about the goodness of human nature. His argument was titled “Pragmatist Mencius and the Problem of Underdetermination.” Choi Guk assumed that Mencius proposed his human nature theory for pragmatic reasons. He focused on Mencius’ discussion of the four sprouts 四端 and his criticism of “Throwing Oneself Away” 自棄, pointing out that these statements could constitute a framework for us to understand Mencius’s ethical intention. The focus is on what we should consider as of our nature.

After a short break, a general discussion was held in the final session. Professor He Jiarui (何佳瑞) from the Fu Jen Catholic University hosted the session and commented on the last two presentations. Toward Professor Wang’s speech, one of the questions raised was: since the rules are changeable for Xunzi, how can he persuade people to obey them? As for Choi Gu’s talk, Professor He expressed appreciation for his challenge to understand Mencius in a new way but also reminded him of the necessity to explain why he considers the traditional interpretation not good enough. Also, Tatebe Ryohei  from the university of Tokyo expressed his interest in Xunzi’s concept of Tongren [通人], and Professor Sato Masayuki (佐藤将之) from the National Taiwan University, who was answered the question. The session ended in a lively atmosphere. 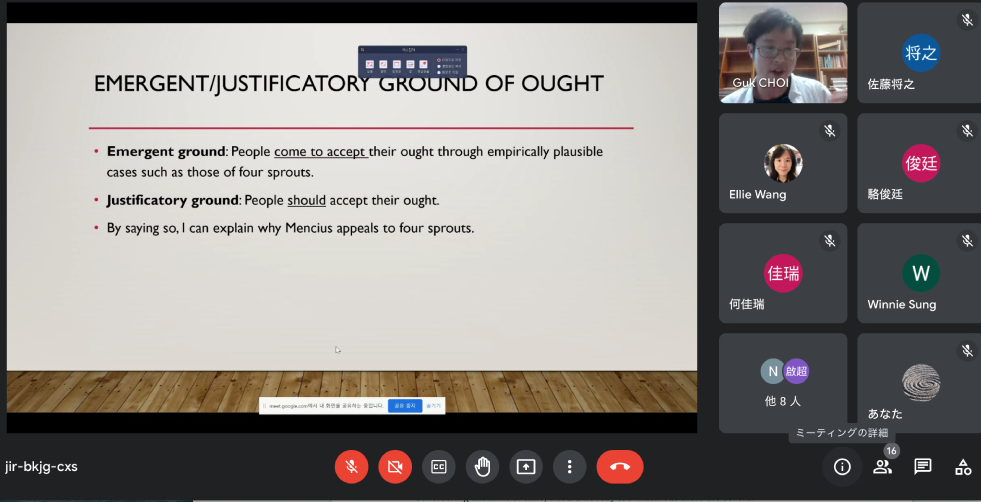 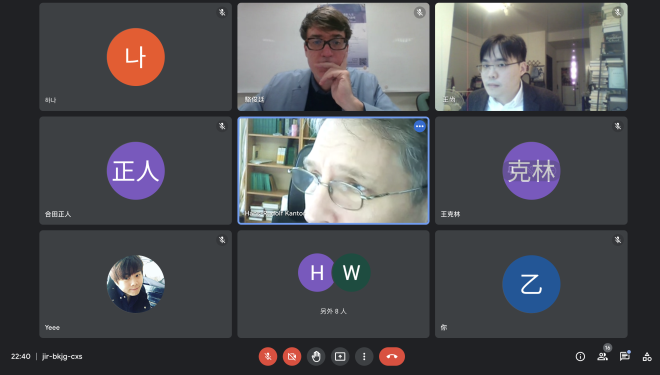