Professor Ishii from the University of Tokyo delivered the keynote speech in the fourth session. Based on his thesis titled ,” Professor Ishii examined Qing evidential scholars’ influence on late Qing revolutionaries first, and then proposed a new interpretation about the origin of radical anti-Li (禮) discourse during the May Fourth Movement. Michael Puett’s terminology, Professor Ishii showed that Tan Sitong’s (譚嗣同) thoughts on reconstructing moral bonds could be understood as the Confucian practice of “rectifying names” (正名). Such a way of thinking helped us to understand the significance of the new interpretation of rituals that emerged in the middle to late stages of the Qing dynasty.

Next, the PhD student Zhang Yingzi (張瀛子) from the University of Tokyo gave her presentation about evidential studies in 17th-century China. Titled “Taste of the Classics: the Sensory Aspects of Kaozheng in 17th Century China,” Zhang’s presentation proposed that the Wu School(吳派) of evidential study was partly rooted in 17th-century literature . She pointed out that Wu scholars emphasized the literary excellence of ancient Confucian and shared a positive attitude on human emotion. When compared with Wan (派) scholars such as Dai Zhen, Wu scholars were more fond of the rhetoric techniques and decorative beauty of classical .

The third and final presentation in the fourth session was given by the PhD student Ding Yi (丁乙) from the University of Tokyo. Ding Yi titled her thesis “Aesthetic Reconsideration on ‘Wordless Beauty’: Focusing on in which she illustrated two different directions to establish Chinese aesthetic studies during the 1920s-30s. The issue of “wordless beauty” (無言之美) played an important role. While Zhu Guangqian understood that beauty exists in artwork and helps us to create an ideal world, Fang Dongmei believed that beauty already exists in the Chinese cosmos so what human beings need to do is to simply be in harmony with the cosmos. However, both of them had a strong concern toward social problems and their different approaches reflect that modern Chinese aesthetics were developed in various ways.

In the fifth session, firstly Professor Masato Goda (合田正人) from Meiji University, School of Arts and Letters, gave a keynote speech, “In a heavy fog of East-Asia: Shunsuke TsurumiThat Goda would like to explore these two Japanese dissident thinkers whose importance hasn’t been justly acknowledged yet was under the reason that today’s Japanese philosophy is reduced to the so-called ‘‘school of Kyoto”.

What is special about Tsurumi is that he not only has radically transformed what the Japanese called “philosophy,” but he has also created a diverse movement of civic resistance or non-obedience in Japan after the Second World War. On the other hand, Yoshimi, a Japanese sinologist who is older than Tsurumi by twelve years, joined the committee of ‘‘Sisou no Kagaku” (思想の科学) – the journal founded by Tsurumi – in 1954. These two thinkers were related by their interest in pragmatism while manifesting different attitudes towards romanticism, cosmopolitanism, etc.

Subsequently, Wang Shang (王尚) from the National Chengchi University’s Department of Philosophy conducted his presentation, “A Junzi is not a Vessel [junzi bu qi君子不器]: On the Confucian Good Life in a Market Society.” He pointed out that the teachings of Confucius to become a junzi, one who transforms himself through self-cultivation to possess benevolence (ren help us to deal with the problems of the good life in a market society.  However, at least in Confucius’ case, junzi as an ideal way of being cannot be manifested in a wide range of social roles. On the other hand, Xunzi provides a more sophisticated argument about the contribution of junzi in the social role/occupation sense. Finally, Wang pointed out we need further discussion on how to resolve the tensions between practicing the Dao and practicing the little path.

In the sixth session, a keynote speech was given by Professor Ng Kai-chiu (吳啟超), also from the National Chengchi University’s Department of Philosophy, entitled “ZHU Xi’s Gewu.” The leading question was: what does Zhu Xi mean by interpreting gewu as “to reach things,” or how to “reach” a thing in Zhu’s sense?

Therefore, Ng explored the relationship between wu (“things and affairs,” and li (理), and argues that it is wu that are themselves concrete existences on which li’s existence is dependent. According to Ng, the principles of Zhu Xi’s thoughts are: (1) concreteness precedes abstraction (there is no independent operation of reaching li), (2) the grasp of li is a gradual abstraction rather than an immediate abstraction, while (3) without the deny of huoren guantong (“one day people will become enlightened and thoroughly understand li,” 豁然貫通). Finally, Ng indicated that this paper leads to a comprehensive view of self-cultivation and the good life: because Confucius pursues a good life through enjoying music, in which the bodily dimension, e.g., his ability to appreciate music, should not be ignored.

Afterward, Zhang Yu-cheng (張育誠) from the National Taiwan University’sDepartment of Philosophy conducted his presentation, “Skill Story and Practical Wisdom in the Zhuangzi: A Metaphorical Explanation.” Zhang focuses on the analyses of the skill story “Cook Ding” (庖丁解牛) in Zhuangzi, in which the cook named Ding argues that what he pursues is the Course (Dao道), something that advances beyond mere skill (ji技). Zhang manifests that we need to use a metaphorical explanation, instead of skill models (e.g., Dreyfus’ Model or McDowell’s Model), to understand Zhuangzi’s skill stories. Concretely speaking, there is a kind of special activity in the story that could be understood as the practical wisdom that guided us to a good life, which is a kind of spirit-driven activity (Shen神) in Zhuangzi’s stories, where the vital spirit in human agents and spirit-like efficacy aim at superhuman entities.

The last presenter, Zhang Ching-han (張景涵) from the National Chengchi University’s Department of Philosophy, gave her speech: “Feeling and Body: Edith Stein’s Theory of Empathy and Wang Chang-Ling’sShe introduced Edith Stein’s empathy theory (Einfühlung), namely, the experience of foreign consciousness in general, and then divided two modes of empathy: sensual empathy and mental empathy. According to Wang Chang-Ling’s “three situational spheres”: thing-situation (物境), emotion-situation (情境), meaning-situation (意境), thing-situation provides a solution to problems regarding sensual empathy (e.g., over-emphasis on the direct relationship between body and sensation), and emotion-situation serves as an alternative understanding of mental empathy to perceive an emotional atmosphere that is perceived together with the body.

After two days of heated discussion, one more business meeting was also opened, where professors and students were able to exchange opinions in a more leisurely manner and expressed their sincere hope that the next conference could be held in person. 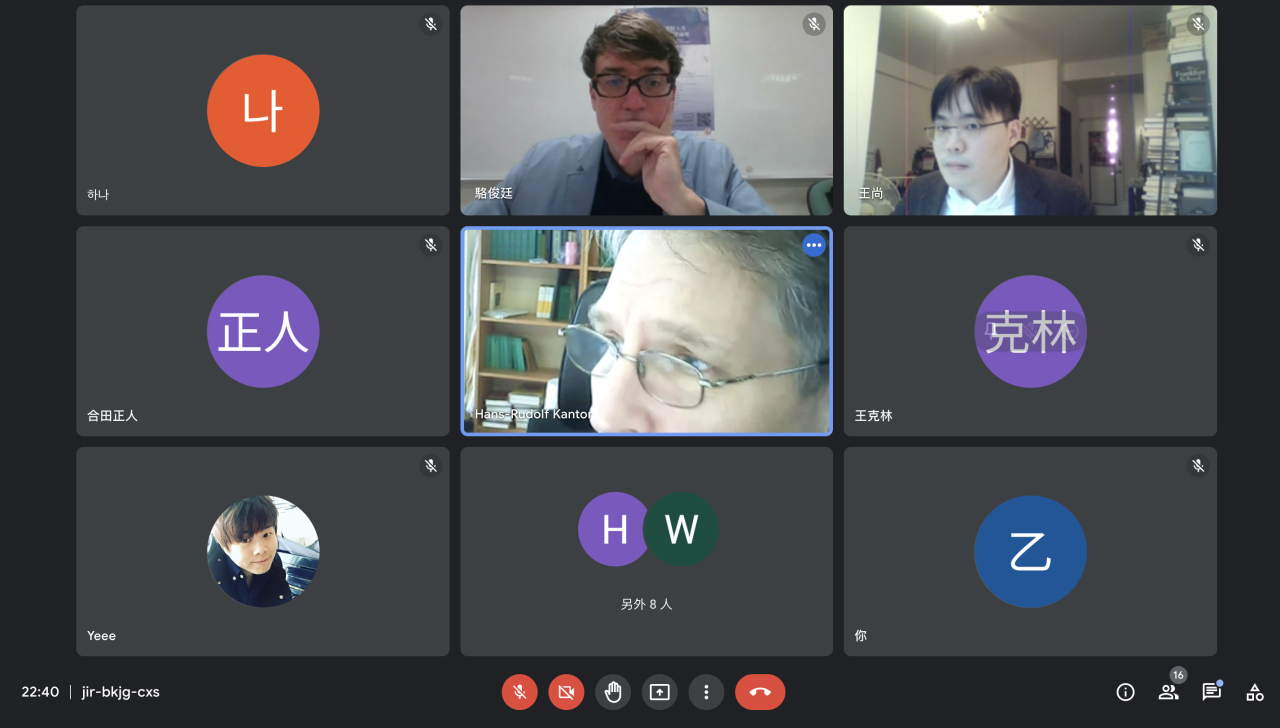 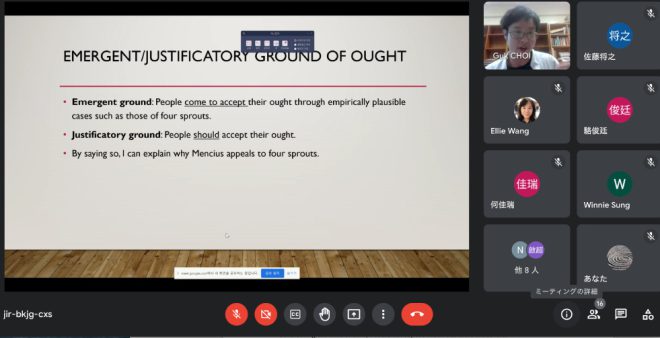