The fourth lecture for the EAA Global Lecture Series co-organised by EAA and Go Global Gateway at the University of Tokyo took place on December 20, 2021, on Zoom. The guest lecturer, Professor Alena Rettová (University of Bayreuth), gave a talk on African philosophy with a particular focus on the concept of the “nonhuman” (i.e., animals, plants, and inanimate nature). 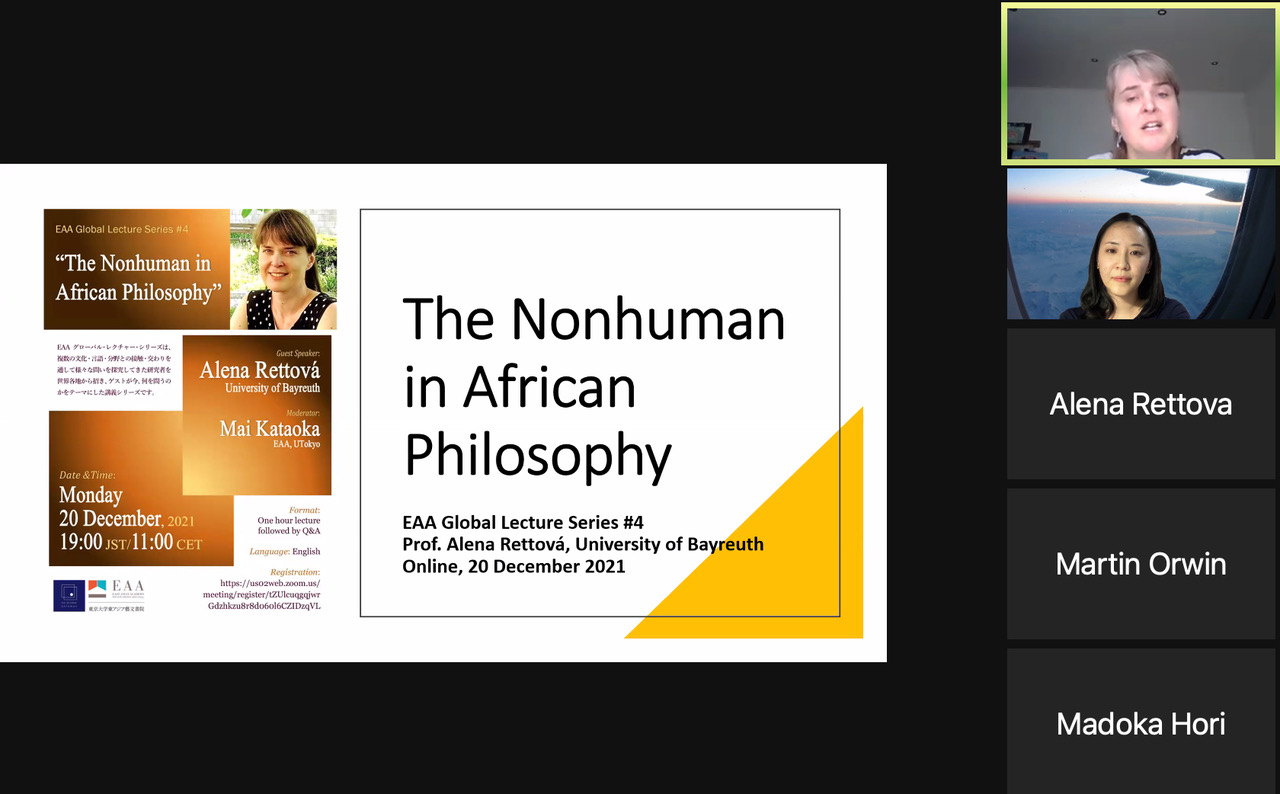 The lecture began with her introduction to the research project that she leads as a principal investigator, Philosophy and Genre: Creating A Textual Basis for African Philosophy, hosted by the University of Bayreuth in collaboration with the University of Warwick. African philosophy is a discourse or a kind of label, she says, that describes texts that deal with African thought. However, the texts on African philosophy published thus far have been mostly written in non-African languages (e.g., English, French, Portuguese, Spanish, Italian, German, and Czech). This neither means that “philosophy” does not exist in the African languages, nor indicates the impossibility of speaking about philosophy in African languages. What problematizes African philosophy in African languages, though, she argued, is scholars’ lack of familiarity with African languages and the fact that they are often blinded by a certain genre-bias. She explained that default genres of Western philosophy resulted in bias and impacted the discourse on African philosophy. This is the reason the research project explores genres other than nonfiction prose, including oral poetry, Ajami writing traditions, prose fiction, and digital texts. It takes a bottom-up empirical approach to identify and discover African languages or Afrophone expressions of African thought. Karin Barbar, a British cultural anthropologist, once argued that “to ignore genre is to ignore a text’s relation to history and social context” (The Anthropology of Texts, Persons and Publics, Cambridge: Cambridge University Press, 2007: 44). By referring to Barbar’s insistence on the need for “context-sensitive, emic understanding of non-western genres” combined with “a larger-scale comparative view of the emergence and transformation of genres in relation to changing social reality” (ibid.: 45­–46), Rettová argued that to understand a culture—the way people in a culture thinks—it is necessary to look at a repertoire of genres, as they manifest the ways in which people express their own thoughts.

Having described what motivated the research project, Rettová then took us through how these African thoughts are projected in precolonial texts with special reference to a Swahili poem “Al-Inkishafi.” She used this text as a philosophical primer, i.e., as a source of philosophical insights about how its readers perceive the world (the “world” in this context meaning the historical and material conditions of our existence as humans, but also designating how these conditions are organized and the way the world functions; in other words, the metaphysical principles of how the world operates). Other literary works shared as case studies included Dunia Uwanja wa Fujo (The World is an Arena of Chaos, 1975) by Euphrase Kezilahabi, Doomi Golo (2003) by Boubacar Boris Diop, and Mosuni (2007) by Espérance-François Ngayibata Bulayumi.

The Q&A session that followed developed into a stimulating discussion involving the floor. The topics discussed included a question posed by Professor Yuki Tanaka (Institute for Advanced Studies on Asia, University of Tokyo), who specializes in Chinese philosophy, in which she asked whether such a thing as a universal concept of philosophy exists, or if it is something specific to each culture. Rettová answered that it could be both, as it is possible to find a common ground applicable to all cultures when speaking of philosophy, but you may also label it differently. She further added what “philosophy” means for her: “I use the word ‘philosophy’ as it expresses a certain attitude towards grappling the world or ideas.”