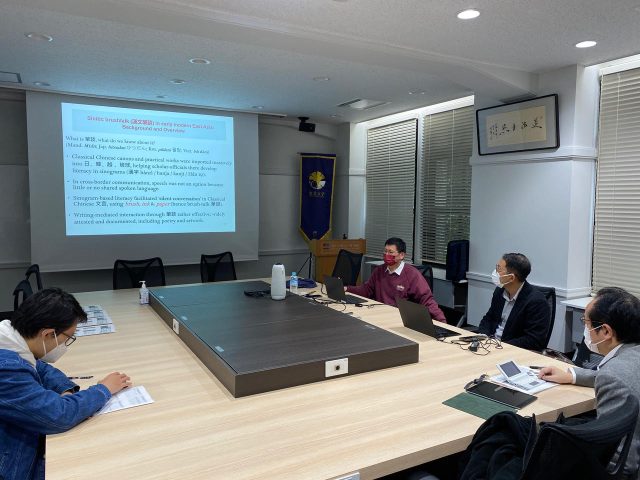 On 24 October 2022, Professor David C. S. Li (The Hong Kong Polytechnic University), who is currently staying at the University of Tokyo as a visiting scholar, gave a talk at the EAA Workshop. In his presentation titled “Writing-mediated Cross-border Communication Face-to-face: From Sinitic Brush-talk to Pen-assisted Conversation,” he took us through Sinitic brush-talk – the use of sinograms as a “scripta franca,” i.e., as a mean of intercultural communication within Sinographic East Asia or the Sinographic cosmopolis. The talk primarily focused on introducing the following: i) historical background and material conditions of brush-talks, ii) empirical evidence that illustrates what happens in the process of such practices, and iii) examples of transnational brush-talk/pen-assisted talk in the past till present.

According to Prof. Li, European philosophers and philologists since the Renaissance believed that sinograms (i.e., 漢字, Mand: hànzì, Jap: kanji, Kor: hanja, Viet: Hán tự) could transmit ideas or exchange meanings directly via visual mode. But this view overlooked interactional dynamics at work in the brush-talk, he explained, and it was not until recent years that this belief, which eventually fed into an “Ideographic Myth,” had been disputed. Brush-talk, he said, could be achieved through the audio mode; in other words, it was made possible by “phonetic inter-subjectivity.” To demonstrate the phonetic inter-subjective process in the brush-talk, he showed how a line from the Analects of Confucius, “有朋自遠方來，不亦樂乎” (“Is this not a source of pleasure, to have friends coming from distant place?”), could be pronounced differently according to one’s preferred vernacular: Cantonese, Wu dialect, Sino-Vietnamese, Sino-Korean, and ondoku and kundoku in Japanese.

The talk was full of illustrative examples of how the brush-talks worked in various contexts. Examples shared include brush-talks that involved diplomatic envoys, for instance, the one between Wu Rulun (Late Qing official) and Inoue Tetsujiro (Japanese philosopher). The other two recurrent contexts in which the brush-talks were practiced were also shared during the talk, including some examples that involved boat drifters and traveling literati (e.g., the brush-talk between Sun Yat-sen and Miyazaki Tōten’s, which has been heavily studied due to its historical significance).

The talk provided us an opportunity to get to know dynamics at work in the process of brush-talk/pen-assisted communication but also characteristics that are unique to such modes of communications, which are distinctively different from other types of intercultural communication (e.g., interlingual translation, simultaneous/consecutive interpreting); and ways in which it might help researchers travelling through and having access to transnational conversations across space and time.