[Report] The Third Meeting of the Room and Space Research Cluster

The Room and Space Research Cluster held its third meeting at 3:00 pm on October 27, 2022. James Thurgill from the Center for Global Communication Strategies (CGCS) at The University of Tokyo gave a presentation on “Spatiality and the Urban Experience: Revisiting Jinnai Hidenobu’s Tokyo: A Spatial Anthropology.” 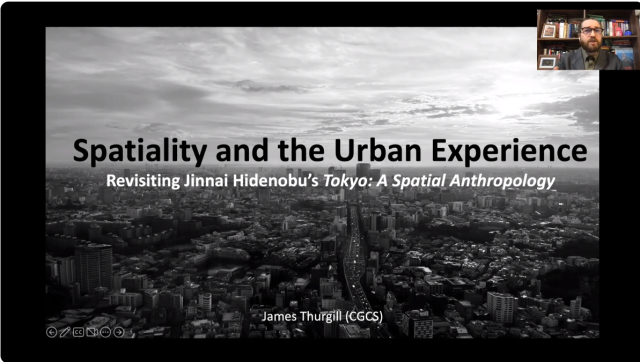 Continuing from the last meeting, we took up discussion regarding the city of Tokyo and considered how we become attached to a space and how to transform that space into a comfortable place. Tokyo’s history of city formation is different from that of other European cities. Considering the nature of Tokyo city, we can identify how we utilize common spaces.

Spatial Anthropology of Tokyo was published by Hidenobu Jinnai in 1985 (English edition is Tokyo: A Spatial Anthropology, Univ of California Pr, 1995) and remains a must-read book for the study of architecture and geography of Tokyo. In that work, the author argues that Tokyo should be discussed with reference to Edo. Specifically, he argued that Yamanote Town was built considering the spatial structure of Edo’s daimyo residences, and Shitamachi inherited the context of Edo as a city of water.

Dr. James Thurgill indicates that the basic purpose of his presentation is to (re)visit Tokyo: A Spatial Anthropology to consider its value for contemporary scholars working with themes of space, place, and urbanism. Dr. Thurgill states that a standout feature of Jinnai’s study of Edo-Tokyo is the novel mixed methodological approach he employs to conduct his analysis. In his opinion, the text does not try to offer a complex theoretical framework for the analysis of urban space, rather Jinnai works with tangible historical and cultural data, maps, and autoethnography to show the perceivable lineage of Edo still traceable in 1980s Tokyo.

For Dr. Thurgill, reading this work required a double translation: 1) a translation into English and 2) as a geographer (not a historian), he needed to translate Jinnai’s “space” into the language and grammar of his own discipline. And it is important that the use of “space” changes according to context. For most of the text, Jinnai is discussing space in terms of urban arrangement and aesthetics, but in some places, it denotes a feeling or quality (e.g., sacred space). Audrey Kobayashi argues that “Space is one of the most – if not the most – important concepts in the discipline of geography. It is also the most difficult to define and possibly the most contested,” “spatiality is a condition of being, not a thing in itself. It is no longer possible – if it ever was – to isolate space from its sticky context, nor is it possible to isolate spatiality as a particular mode of being or historical moment, a particular place, landscape, or setting. Rather, geographers increasingly recognize and understand spatiality . . . as a dialectical process’ (Douglas Richardson; Noel Castree et al., The international encyclopedia of geography: people, the earth, environment, and technology, John Wiley & Sons, Ltd., 2017) (cf. kūkan). Thus, spatiality, as an amalgam of social and physical space that exists in unlimited combinations, is, perhaps, a more useful term for understanding the various interpenetrating layers of historical, social, cultural, and imagined spaces which form Edo-Tokyo. In short, Jinnai’s approach reveals Tokyo’s to be more than the site of individual spaces, rather it shows the city as a constantly unfolding spatial mass, a spatiality. 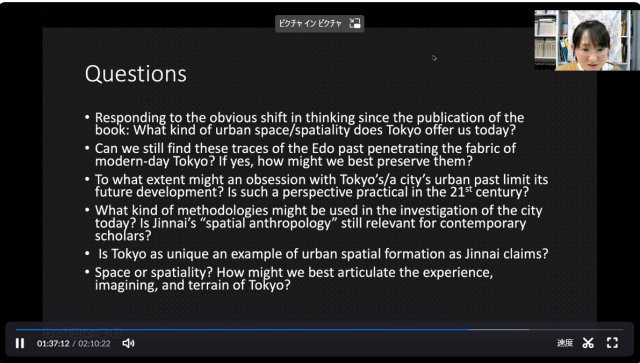 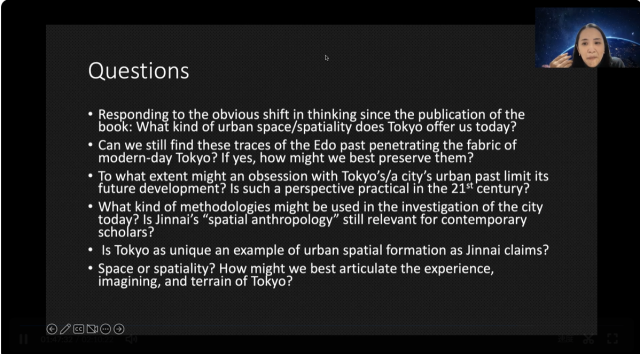 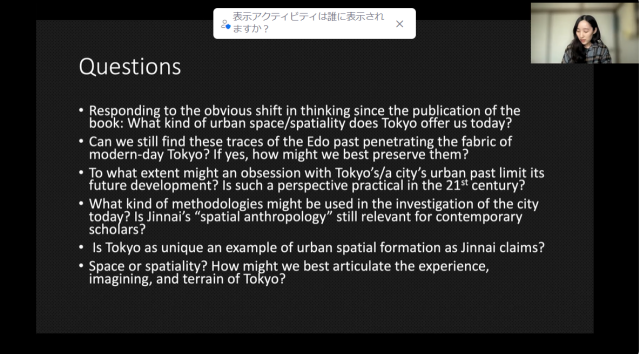 Dr. Thurgill was asked in the open questions period about the background to the initial publication of this book in the 1980s. He replied that there may be two reasons for it. One is a direct response to significant changes ongoing in Tokyo at the time, which sought to erase the past. And the other is an attitude of returning to the origins that was also seen in various fields, such as literature and architecture. In response to another question, Dr. Thurgill also noted that while the book is certainly characterized by the use of the walking methodology, it is well balanced by a combination of historical and geographical methodologies. Possible measures to address the decline of cities in response to economic or global problems were also discussed.

Reported by Yuki Tanaka (Institute for Advanced Studies on Asia)

The author would like to thank Enago (www.enago.jp) for the English language review.