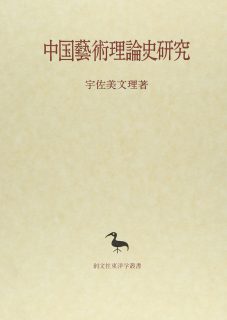 Though the author clearly categorizes his work as Chinese philosophy (Introduction ⅲ), it contains a far wider range, touching upon the fields of art history and aesthetics. Maromitsu Tsukamoto has already pointed out these two aspects and elaborated on how this book provides new vantages for the study of art history (<Review> Bunri Usami, Chinese History of Art Theory, The Journal of Oriental Researches, 2017, 76(3): 476-489). Here, I will revisit the book, centering on its underlying scholarship of aesthetic thinking.

Chinese History of Art Theory is constituted of a long preface and four chapters. The preface and chapter 1, “Discourses on Qi気 and Form形,” scrutinize these two core concepts (qi and form) and their relationship. Qi, which can be understood as atmosphere, is formless while recognized as the original power to beget everything, including forms. In terms of the relationship between qi and form, the history of Chinese philosophy has two main turning points: the Six dynasties, when the artists attempted to convey qi through forms of the objects, and the Song dynasty, when qi in painting was deemed as that from the painter and thus theoretically justified the value of the school of literati painting [文人画].

Chapter 2, “Concepts Relating to Art,” tackles three concepts: pleasantness[快], ugliness[醜], and imitation[模倣]. Compared to qi and form, which are oft-discussed, these three concepts have not been used to examine Chinese art theory. The reason this is a new perspective is because they are concepts from Western, not native Chinese, aesthetic theory. However, what is important here is that Usami does not utilize those Western concepts in their original contexts, but by applying them to Chinese art, discovers new aspects of Chinese tradition.

For example, the most renowned thesis regarding pleasantness in Western aesthetics is from Immanuel Kant’s Critique of the Power of Judgment (1790) where he states that “an aesthetic judgment accompanied with pleasantness shall be universally valid”. Usami refers to this thought and uses the term “universal [普遍的]” while arguing that in the Chinese context there are two ways to interpret it: first, a judgment is valid regardless of the difference between individual recipients, and second, a judgment is valid regardless of the difference between individual objects that are being judged (122). The first interpretation is similar to Kant’s statement. However, as Usami points out, in the Chinese context validity is guaranteed by the fundamental principle of qi (122). Because qi dominates the form in a painting, different recipients can receive the same qi and thus reach the same conclusion (whereas in Kant’s context, the fundamental principle is “Common Sense”). On the other hand, Usami distinctly maintains that the second interpretation of validity characterizes “Chinese aesthetics (aesthetica, in its Latin meaning as A. G. Baumgarten created)” (122). The Huainanzi [淮南子], as quoted by Usami, claims “all beauties please people’s eyes while having different bodies and faces” (121). This kind of possibility, according to Usami, is supported by nothing but the Chinese aesthetic ability (123).

Similarly, the topic with regards to imitation also manifests the reinterpretation of Western aesthetic thought. Ever since Plato, imitation, or mimesis, is widely considered to be the distinctive feature of Western art theory and what distinguishes Western from Chinese art, which supposedly has no such standard. However, Usami reconsiders the related problem in Chinese art theories. Yet, what Usami focuses on is not the imitation of nature to gain so-called “mimetic illusionism” as in the West, but the imitation of the works of earlier masters, one of the most basic approaches for learning Chinese painting.

Chapter 3, “Thought and Image,” centers on the images on Hua-xiang-shi[画像石] or Hua-xiang-zhuan[画像磚] (stone or brick with pictures carved on it) in the Han dynasty, exploring how the thought that was not recorded in written materials was expressed in images. The topic here is about the ancient view of life and death, especially concerning the world after death.

The last chapter, “Discourses on Fenjing (Light and Atmosphere),” discusses the features of landscape painting through reconsidering the concept “Fengjing風景.” The establishment of the landscape painting, or, to be more exact, Fengjing painting, was illuminated by the establishment of Fengjing poetry. Before the middle of the Tang dynasty, Fengjing meant nothing more than “light and atmosphere”; in comparison, the English word “scenery” indicates a broader range of phenomena. The poets and painters pursued the expression of qi instead of the representation of the objects before their eyes. Thus, the function of the fundamental qi system underpinning Chinese art is verified again.

The above four chapters encompass various aspects of Chinese art theories. Since the discipline of aesthetics regarding Chinese art theory is yet to be developed, the relative issues were, by far, mainly discussed in the fields of Chinese philosophy and art history. However, previous studies of Chinese philosophy tended to neglect the visual elements (e.g., “form” and its appearance in concrete works) whereas studies from art history overlook the historical transitions of concepts. By referring to the Western aesthetic framework and re-scrutinizing the concepts in Chinese contexts, this book by Usami explores Chinese aesthetics authentically. This limited review could not highlight many other original viewpoints of it; for instance, even in the discussion on the frequently analyzed concept qi, Usami achieved an unprecedented clear and analytical investigation, questioning the ontological meaning of qi due to his profound Western aesthetic scholarship as a Chinese philosophy researcher.