[Report] The Second Meeting of the Room and Space Research Cluster

The Room and Space Research Cluster held its second meeting at 3:00 pm on September 8, 2022. At the meeting, Tanaka Yuki from the Institute for Advanced Studies on Asia gave a presentation titled “What is a Common Space? A Review of Tokyo Vernacular: Common Spaces, Local Histories, Found Objects by Jordan Sand.“ 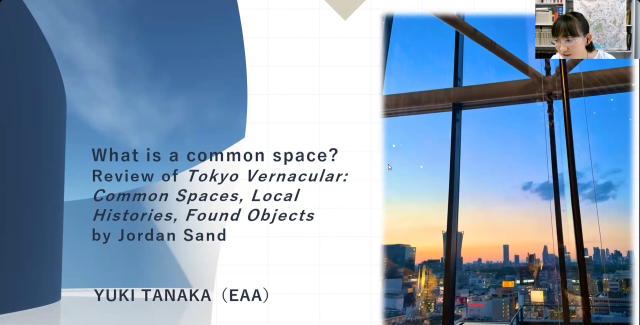 The Room and Space Research Cluster considered various types of “houses,” such as the Bunka apartments from Japan’s Taisho period. The group also discussed the history of houses and architecture in England as well as apartments in Taiwan. Through several meetings, I found that we are guided by vernacular space and live in it, and we give space additional vernacular meaning. In Tokyo Vernacular, Jordan Sand explains that every city also has its own vernacular: a language of form, space, and sensation shaped by the local history of habitation (Tokyo Vernacular, Univ of California Pr, 2013, p.2).

How does one get used to uncomfortable new “spaces”? This was a considerable problem for me when I moved to a new university during the pandemic. However, Tokyo Vernacular taught me that various mechanisms are necessary for us to think about the city of Tokyo, or other smaller spaces, as a single community. Admittedly, the mechanism is not entirely predictable by architects and city planners. In Tokyo, we are affected by these vernacular elements; therefore, how can we think of Tokyo as “ours”? By considering this problem, we can think about what it means for us to own and be attached to something. Even if it is just a “communal illusion,” if we gradually expand the scope of the air we share in various places, it might provide a clue to solving the problems I raised above.

I will now briefly summarize the contents of this book. The last decades of the twentieth century saw the worldwide development of public history and preservation. Tokyo was late to join this trend, ostensibly with little material to preserve. Nevertheless, in the 1970s and 1980s, neighborhood activists, scholars, architects, artists, and writers set about recording and preserving the traces of Tokyo’s past. Something caused Tokyoites to view their city through a new lens, and this mobilized some of them to research, preserve, and celebrate what they found. In embracing Tokyo’s vernacular, preservationists and their audiences have rejected the grand scale and abstract symbolism of monuments. In place of the politics of the national public, this new vision idealized a commons that had been claimed by urban citizens without official sanction. This new vision is concerned with the space of the city and the rights of residents within it.

This book examines four sites for the mobilization of Tokyo’s vernacular past since the 1960s: the public square, the neighborhood, the street, and the museum. Chapter 1 discusses the expulsion of protesters from Shinjuku Station’s West Exit Plaza in 1969. Chapter 2 discusses the growth of historical consciousness and preservation activism in old downtown neighborhoods (Yanesen). Chapter 3 discusses street observation studies. Chapter 4 discusses The Edo-Tokyo Museum and other everyday life museums and exhibits designed in the 1980s. Each of these four sites connects to issues of urban property and the basis on which residents make claims regarding poverty. The history of the ideals and principles of the public square and the commons reveals that city residents have tested the spatial and legal boundaries of the modern regime of private property. 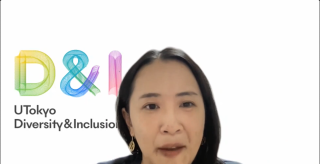 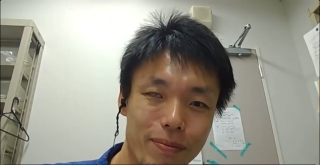 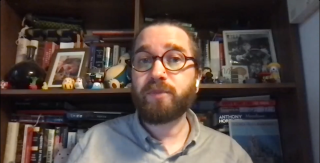 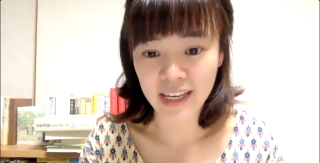 After the presentation, we discussed the exhibition at The Edo-Tokyo Museum, the concept of kaiwai, the closeness of the “Yanesen” community, and the difference between communal spaces and common or public spaces.

After our discussion, I continued to consider what we can learn from a public space centered on empiricism without a “theory” written in this book. I also considered the question of what the “University of Tokyo” means as a public space. It is possible to consider the university as serving the role of a plaza or kaiwai. Additionally, there is a possibility that universities and shoin will become an effective means of recovering our community from the city of Tokyo.

This book discusses the “Tokyo vernacular”; however, even if the concept of kaiwai is unique to us, and even if Tokyo has its own vernacular, we can imagine another vernacular. Moreover, using this imagination, is it not possible to gently form a roof covering the entire world?

Reported by Yuki Tanaka (Institute for Advanced Studies on Asia)

The author would like to thank Enago (www.enago.jp) for the English language review.